First it was a football quarterback, then it was a woman’s soccer star, and now it’s a fencer. And others in-between. These are American athletes protesting the National Anthem.

TIME magazine (8/11/19) notes that a 26-year-old male fencer representing Team USA at the Pan Am Games decried America because of “the multiple shortcomings of the country I hold so dear to my heart. Racism, Gun Control, mistreatment of immigrants.” And so on and so forth.

Sadly, many other Americans, including athletes, have made a fuss protesting the Star Spangled Banner and the nation it symbolizes.

I like the hymn “America the Beautiful,” which includes the prayer that God would mend our every flaw. Certainly, there are many flaws to be mended. But I have a feeling that nothing would ever satisfy those who protest our National Anthem.

As a student of American history, I believe God did something special in the creation of this nation. It began with the Pilgrims who came here “for the glory of God and the advancement of the Christian faith” (Mayflower Compact, 1620) and continued through the Puritans who came in order to create “a city on a hill” (Rev. John Winthrop, founder of Boston, 1630).

Rev. Thomas Hooker led his Puritan followers to create the colony of Connecticut, and they wrote up the first full constitution on American soil, which helped provide ideas for the U. S. Constitution exactly 148 years later. The “Fundamental Orders of Connecticut” (1639) explained their whole motive for their settlement was: “to maintain and preserve the liberty and purity of the Gospel of our Lord Jesus.” This was all during the settling era.

But the Christian make-up of early America did not stop during the founding era. The Library of Congress notes: “The Continental-Confederation Congress, a legislative body that governed the United States from 1774 to 1789, contained an extraordinary number of deeply religious men.”

It adds, “Congress proclaimed days of fasting and of thanksgiving annually throughout the Revolutionary War.” These were not just namby-pamby prayers “To Whom It May Concern.” For example, the proclamation of May 17, 1776 by Congress for a “day of Humiliation, Fasting and Prayer” mentions: “the merits and mediation of Jesus Christ, [to] obtain his pardon and forgiveness.”

Jump ahead another generation, and we come to the era memorialized in the National Anthem.

The context was the War of 1812, in which we were again at war with England.

During this conflict, the British were able to invade Washington, DC. They even burned down the White House and the Capitol. Then they set their sights on the much more plush city at the time—Baltimore.

Meanwhile, Francis Scott Key served as the District Attorney at Georgetown, Washington, DC. During the War of 1812, President Madison authorized Key to negotiate the release of an American being held captive by the British in a fleet near the mouth of the Potomac River. This was on September 13, 1814.

As Key and his delegation set out for the negotiation, they were taken aboard a British truce ship and held as captives overnight—as the British fleet attempted to decimate Fort McHenry. The fort protected Baltimore’s harbor.

Through the night of September 13-14, Key watched helplessly as the British mercilessly bombarded the fort.

But when the morning came, at “the dawn’s early light,” Francis Scott Key was overjoyed to see the fort still standing, and the American flag still waving.

This incident inspired him to write a hymn/poem, dedicated to the “Defense of Fort McHenry.” The song, “The Star-Spangled Banner,” became instantly popular.

In 1931, Congress adopted it as our National Anthem.

Although we’re all familiar with the first verse of the anthem, many people don’t realize that the 4th verse mentions God:
“Blest with vict’ry and peace, may the Heavn’n-rescued land
Praise the Pow’r that hath made and preserved us a nation!
Then conquer we must, when our cause it is just,
And this be our motto, ‘In God is our trust!’”

As founding father John Adams once put it, “Posterity! You will never know how much it cost the present generation to preserve your freedom! I hope you will make good use of it! If you do not, I shall repent it in Heaven that I ever took half the pains to preserve it!” 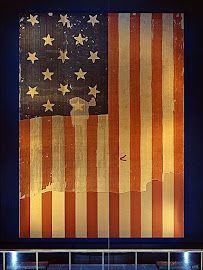 This is the Star-spangled Banner (Smithsonian Museum, D.C.)